From the Chair and Director General 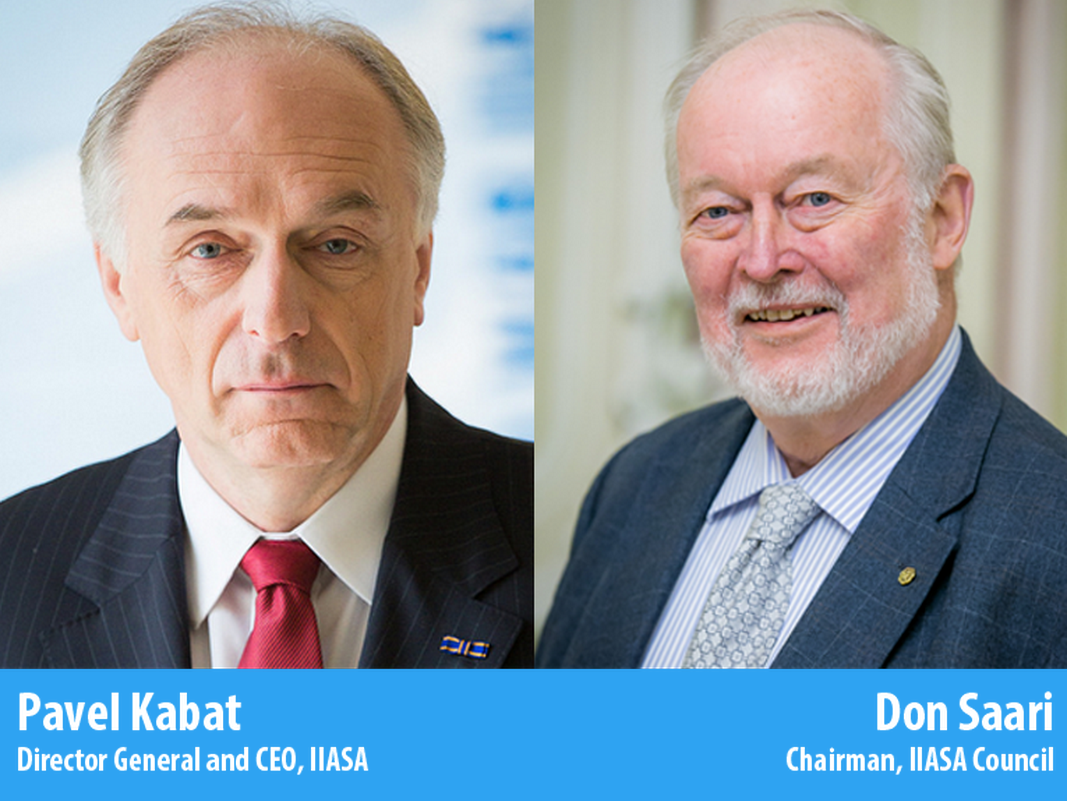 An interactive overview of IIASA’s 2014 research is available in the Scientific Update at www.iiasa.ac.at/SU14

We begin with profound thanks to Peter Lemke who retired in 2014 after five years as chair of IIASA’s governing council. IIASA owes him a considerable debt of gratitude for his support for the Institute and its scientific mission, and we are delighted that he will continue to contribute to our mission and work as an IIASA Distinguished Visiting Fellow.

We take this opportunity to thank our 22 member countries through their  National Member Organizations (NMOs) for their support in 2014 and unstinting contribution to Institute life. The Mexican National Committee for IIASA became our 22nd NMO in 2014, and some of its first collaborative work is mentioned in this report. A more detailed insight into all IIASA’s scientific work is also available online as part of our 2014 Scientific Update.

We are pleased to report that, financially, IIASA is in a very healthy and solid state, having received close to €20 million from our NMOs and through additional contracts and grants in 2014. Between 2006 and 2014 IIASA researchers were awarded highly competitive grants that amounted to €69 million. This was part of a total funding portfolio of €329 million from external projects, in which IIASA was and is involved as a principal research partner, most of them in close collaboration with leading science and policy institutions in our NMO countries.

There were 323 research scholars, research assistants, postdoctoral research scholars, and young scientists from 45 countries working at IIASA over the year 2014, supported by an external faculty of 3,475 alumni worldwide, 25% of whom were actively involved in IIASA research. In 2014 IIASA scientists published 247 articles in leading international journals. Citations of IIASA articles have also continued to increase significantly.

We have crosscutting IIASA Future Initiatives underway or in planning that span the globe: the Arctic, the Tropics, and Water Futures. Three successful workshops were held in 2014 by our initiative on Eurasian economic integration. In currently difficult geopolitical times, it was attended by high‑ranking representatives from the science, diplomatic, and research communities across the European Union, Russian Federation, Ukraine, Kazakhstan, China and several other states in the Euro-Asian region.

IIASA’s mission to provide–through excellent systems science–a bridge across geo-political divides is well recognized by world leaders. We are very pleased that IIASA collaboration and membership is growing. For example we are successfully pursuing additional opportunities for membership and collaborations in the Middle East and Africa.

We are also pleased that major international organizations, most notably the United Nations, are reaching out  to IIASA for scientific support to substantiate major worldwide discussions and policy agreements such as the COP21 United Nations Climate Conference and Sustainable Development Goals due to be adopted later in 2015.

The tradition of IIASA is interdisciplinary and integrated cross cutting research. As you will see within this report, from our 2014 Scientific Update, and in our bi-annual periodical Options ,   it is becoming increasingly more obvious that a systems and “out of the silo’s” thinking  lead to both new scientific insights  and discoveries, and it can  provide substantial co-benefits to our economy and society.

We thank all of IIASA’s scientists, support staff, and collaborators for their tireless work in 2014 for the support and benefit of IIASA.